Over the last couple of days have seen a lot of discussions as to how Indian markets are possibly getting into a phase like 2011 ( my view ) and 2008 ( the fear view) and how a lot of sectors are so troubled.

The funny part is nobody knows what are the constituents of the Nifty and their weightages. Also these constituents change marginally on a daily basis because of calculation being free float market cap.

So lets not get into details and look into Nifty and its constituents as 31st  December 2007 and 31st December 2015. There are some amazing revelations.

I am just putting the Top 20 weights as that is almost 75% of the index. You can download the full weightage file here. 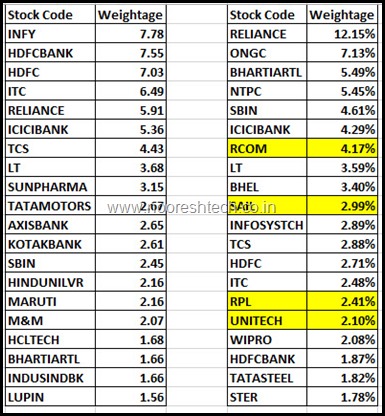 Quite a lot of this is due to the change toward free float methodology and the big drops in many stocks and big rallies in others. You may find much more such facts.

To simply put Nifty today is a totally different animal then from what it was in 2007 and thats why the magnitude of ups and downs have reduced. We have a bunch of solid businesses ( unlike frothy ones in 2008) at the top of Nifty top 20 or a lot of crazy moves which have happened in smallcaps/microcaps.

For example even if the most troubled sector - PSU Banks like BOB SBI and PNB were to fall another 50% in next few months it would impact the Nifty by only 100-150 points.

My personal view is Nifty could bottom out around 7200-7400 a few 50-100 points here and there but will make a reversal slowly. But any incremental positives across global macro, domestic macro, Inflows or whatever you can discuss can lead to a sharp up tick from lows of 10% +. Think the current scenario is very similar to the one in 2011. This post will explain my technical perspective - https://nooreshtech.co.in/2016/01/nifty-2016-and-2012-will-consensus-of-downgrades-be-wrong-again.html

Also I would suggest you put all the worst possible prices you think for the Top 20 Nifty stocks in this excel sheet on Pessimistic Nifty and you would know what Nifty could be - https://nooreshtech.co.in/2016/01/nifty-calculator-january-2016-kya-lagta-hai.html