I have been writing on some market manipulations as well as pump and dump stocks for quite some time although its difficult to put in time to elaborate on the same.

One of the classical cases of such mistakes being made by small investors consistently is investing in Yash Brila Group companies.

The best part is every couple of months there is a company which comes out of the group with glossy advertisements on Business Channels !! and investors still end up buying them.

The first one to come on the radar for last few months has been Birla Power and the advertisements keep coming back every few weeks.

On the first look at the name it seems a power generation company but it is not. On the second look the promoter announces a 5000 crore expansion plan for which 1500 crore would be pitched in by the promoters into the SPV !

Whoa the best part market capitalization of the company then was less then 250 crores. Since then the market cap has now come down to 130-150 crores.

Before that we saw a similar built up on Birla Shloka Edutech and the company came out with a FPO.The stock was rigged up before the FPO to higher levels of 80-100 and then a FPO was done at 45-50 levels.

Followed by this with the rosy views stock went up to 80-90 again.

Since then the stock has been on a vertical decline to 20s and has recently jumped to 40s.

The best part about this company is it keeps changing names every few years. Sometime back when retail boom came in it was supposed to be named Birla Lifestyles. Now with the education boom its become Birla Shloka Edutech. I am trying to guess the next name 🙂 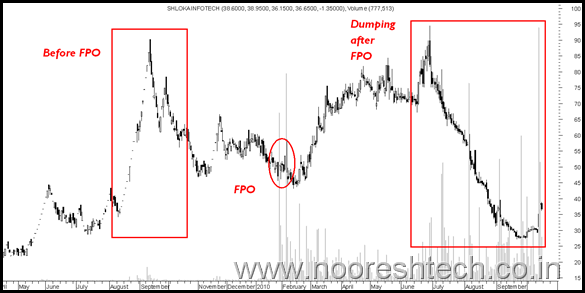 I have had many queries where people have bought few lakhs of this stock and actually the same dumbasses recommending me saying you are getting a BIRLA COMPANY at 1 rs what else do you want:)

I had no answer but to say best of luck:)

Now first of all why did the company split from 10:1 after IPO was a serious matter of concern.

Also the general investors dont understand that majority of the brokers charge 5 paise fixed so one ends up paying 11% in brokerage in this trade!! Whoa how stupid would be to buy something at that brokerage.

In between seeing the speculative built up in the stock i had also suggested the stock could jump 30% in a short time which it did - Check the link here - https://nooreshtech.co.in/2010/08/midcapssmallcaps-rally-time-to-be-stock-specific-to-make-money.html

The stock did rally from 0.9 to 1.35 which is basicaly speculation. What was interesting is after the move there were advertisements on the Business Channels like CNBC talking glossy things about the company.

Followed by that the stock fell by 40% ! Why does the stock go down after such rosy advertisements ! 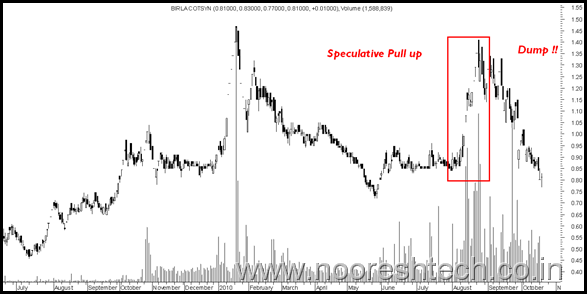 The next on the radar was Zenith Birla. Yet again the same methodology. Stock moves up in a speculative manner followed by which nice advertisements giving big expansion plans, bonus etc come on the business channels.

The stock has announced bonus and dividends to allure the investors. Meanwhile stock is down 50% after the goodies played on CNBC 🙂 ! i just saw the ad again :) 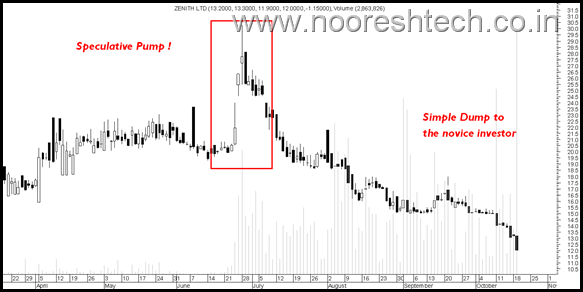 1) Why would a company spend so much on advertising on a Business Channel. Isnt that a useless expense. Why is it not spending money on selling its products.

2) The company announces rosy announcements and expansion plans giving high growth expectations. But there is no need to sell the story to the viewers of a business channel who are majorly the normal retail investor. There is hardly any company presentation for the institutions if the company needed to raise money.

3) Every few months there is an advertisement on one of the group companies.

4) The best part is all the stock are first pulled up by 30% before the advertisements.

5) The bestest 🙂 part the stock falls by 40% after the advertisement with high volumes !

Although in the above observations none of them have been done on the actual fundamentals of the company or any digging into the facts and we see so many negatives. If one does more digging into the above companies there could be some glaring negatives:)

This is yet again a clear warning to investors to be wary of Free SMS, Rosy Advertisements, Multibagger Tips etc 🙂 . If you have come to

The above view is purely personal and could be entirely fictional and bears no resemblance to any existing company 🙂 - Do read the disclaimer - https://nooreshtech.co.in/disclaimer