The book review is written by Jeet Chetan Shah

Valuable Insights from a Value Investor

Common Stocks & Common Sense: The Strategies, Analyses, Decisions and Emotions of a Particularly Wealthy Investor provides a detailed insight into common stock investing using a case-by-case approach of real-world investments done by author Edgar Wachenheim III. He is the CEO, founder and chairman of Greenhaven Associates, an investment company that averages returns of 19% per annum, before fees. Edgar is a value investor who invests with a few important tenets that he doesn’t veer away from.

Each case put forward by Ed gives context to the tenets he has described: Buy cheap, identify positive catalysts, invest with a margin of safety, be a contrarian, and control your emotions.

Everybody who knows about value investing is familiar with these rules of thumb, however, Ed walks us through his rigorous analytical and decision-making process using these case studies. Insights into this process allow the reader to use them as a template to critically look at their investments. The idea of creating a unique frame of reference, one that goes against conventional thinking creates an opportunity for investing.

The book also talks about various behavioral effects that are attributed to the stock market, value and momentum. Ed seems to grasp these concepts intuitively and showcase its application in various case studies.
“I believe that the efficient market hypothesis fails because it ignores human nature, particularly the nature of most individuals to be followers, not leaders. As followers, humans are prone to embrace that which already has been faring well and to shun that which recently has been faring poorly. Of course, the act of buying into what already is doing well and shunning what is doing poorly serves to perpetuate a trend. Other trend followers then uncritically join the trend, causing the trend to feed on itself and causing excesses.”

The book also ends with a summary chapter that puts forward twenty-five pieces of wisdom about investing that reads like a memo.

Ed doesn’t shy away from talking about his failures, from the loss he incurred due to his position in AIG (American International Group). Ed invested in the company with the rigorous research and modelling he does for any of his positions; however, the 2008 financial market crash caused the price of the stock to plummet. This supposed failure is a reminder that even the most seasoned investors encounter losses regularly and a successful investor is defined by “a favourable batting average” and not having “a favourable return on every holding.”

Making the same mistake twice for the same position is a rookie mistake, a rookie mistake Ed recounts for his position in IBM, he sold a profitable position in IBM at $16, only to find the shares rise up to $24 at which point he rebuilt his holdings aand hten sold them at $48. After which he just sat and watched the share price rise up to $80. Ed missed the idea of momentum himself while investing in IBM. The position was built by accurately painting a picture of the future the company after its suggested cost structure changes. One only has to be more accurate than other investors to garner a profit.

The only criticism I have with the book (it is very much a nitpick) is the fact that it could be a little difficult to form general conclusions using these case studies. For example, Ed invests in Interstate Bakeries on ‘his’ perception of the competence of the CEO. While this is a valid strategy (he is the successful rich investor after all), it is a stretch to infer cause and effect when it comes to something inherently subjective opinions on a company’s management.

Investment principles and strategies are easy to find—entire libraries have been written about theories and methods and what 'should' happen. But this book goes beyond the typical guide to show you how these ideas are applied in the real world—and what actually happened. Investors seeking real insight, real expertise, and a proven track record will find the book a uniquely useful resource. 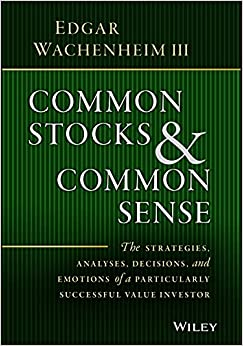