Also a #disclosure the stock was recommended in Technical Traders Club

For the last decade or so STAR Telefilms - Star Middle East FZ-LLC  held a 26% stake in the co.

In the last couple of days could see a buyer of 40-50 lakh shares on NSE in total buyers bid. Was waiting for a block deal for the trade and boom these guys go smart and use MCX-SX to do the block deal.

Balaji Tele has rarely traded on MCX-SX  but today the whole block got executed on MCX-SX. 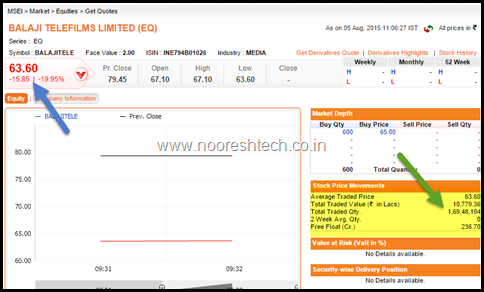 You can check this link - Balaji Tele on MCX-SX

Will this be a start of Block Deals to happen on MCX-SX. Did Balaji give a new turn on how to do Block Deals !!

( There are some rules regarding price for a block deal on NSE/BSE which are not there on MCX-SX i suppose. A lot of deals have to be open market and leading to slippage.)

Do download the App. Would appreciate your Reviews on Play Store.

If you would like to learn Technical Analysis in a classroom session.