Before you read this lengthy post i warn you it is boring and not really useful but just some time pass.

The fall in Gitanjali Gems has become a big talking point in the market of late with the stock falling from 600 to 130 and can fall much much more also ( Its not a buying advise ) .

This is the chart.

Is the history repeating itself and stock going to 60 ?

What is more surprising is the greedy acquisition done by the promoters over last 3-5 years. If you check the insider trading https://www.bseindia.com/corporates/Insider_Trading.aspx?scripcd=532715

it shows how the promoter kept buying the shares from open market. In the last 1 year itself the holding has almost gone from 54-55% to 59.5% which is almost 50 lakh shares or even more ( have not calculated ) but huge acquistion q-o-q for last 3-4 years.

Import duty being hiked to 8% and RBI norms lead to a steep fall in Titan in 3 days but for the same period we did not see Gitanjali falling. Manipulation to keep the stock floating even in such scenarios.

Somebody from the management did speak to CNBC on 25 June after two 20% down circuits giving clarifications but could not stop the stock.

Supposedly 1/3rd of the promoter holding was pledged and finally Macquaire invoked pledges close to 5.43% of equity ( they did hold another 2.8% as per March 2013 ).

For now there are around 1 cr shares seen every day implying 10-11 % of shareholding wanting an exit. Could be more also.

If all this was not enough the next biggest shareholder after the promoters seems to be LIC with 4.36% . In the last 3 quarters the holding of LIC has gone up from 0 to 4.36% or around 40 lakh shares. That implies a notional loss of 150-200 crores for LIC.  ( LIC also saw such a change in Core Education just before the drop ). 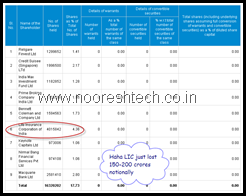 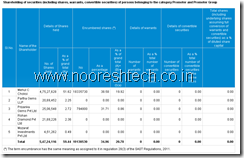 I doubt LIC acquired the shares from open market ( if it did then its sad ) but seems like conversion of some debentures which were issues in 2009 and had end date in June 2014.

The Company, after having obtained CARE A+ [Single A
Plus] rating from Credit Analysis & Research Limited (CARE)
raised a sum of Rs. 125 Crores by way of issue of 1,250 12%
Secured Redeemable Non-Convertible Debentures (NCDs)
of Rs.1,000,000/- each, at par on private placement basis to
Life Insurance Corporation of India which is being listed on
BSE.

As per the notes of account on this link

On 22nd June, 2009, the company issued 12% secured redeemable non convertible debentures of Rs. 1,250 Million to LIC of India. The tenure of the debentures is five years (maturity date: 21st June, 2014) and are redeemable in eight equal quarterly installments with initial moratorium of three years. The said debentures are secured by first pari passu charge over certain immoveable properties in Hyderabad (A.P.) belonging to one of the wholly owned subsidiary. During the year, the company has transferred Rs. 250 million to Debenture Redemption Reserve (DRR) and cumulative balance in DRR account is Rs. 750 million. The first installment of Rs.156.25 million is due for payment in Sept, 2012.

Need to read more on this part of the LIC transaction in Gitanjali. Because LIC sitting on such a huge loss in Gitanjali and Core does not give a good feeling.

Gitanjali at current market cap of 1200 crores is now available at a P-E of 2 and price to sales of 0.07 and the numbers just keep getting exciting with it losing 5% of value everyday. To add to it the company says the Brand Value of Gitanjali brands is 5500 crores as per September 2011. The corporate presentation of Gitanjali  clearly shows the global presence of the brands it owns.

But all said and done whenever there is a governance issue the market kills the stock 🙂 and Manipulation of stock prices leads to sever calamities.

Now what can happen to Gitanjali Gems.

As the ticker shows there is around 1 cr shares to be sold ( pledged promoter quantity seems to match) , there could be another 50 lakhs to 1 cr odd shares out of the 1.6 cr holding in public as shown above ( considering the fact Benett Coleman and LIC wont be selling and some more benami holding ).

So whenever the stock sees a delivery volume of around 1-2 cr shares getting over in a few days the stock can stabilize and give a jump. This can happen at 60 or at 100 or 130 god only knows but will be seen on the screen. The stock may bounce a good 30-50-100 % after such a deal.

The flip side we have cases like Satyam also where the stock went from 600 to 6 rs and then 100. So its no point being brave but if you do have to gamble keep it small 🙂

Some ideas for people holding or wanting to buy

-> If you hold there is no other option as you cannot sell the stock and consider it as one big mistake or pray that this turns out to be 2008-2009 for the stock when it went back from 30 to 600 again. Only supporting factor is you do see Gitanjali shops all around making it an entity. ( but so was Deccan Chronicle )

-> If you want to buy the stock ? ( There is absolutely no need to catch a falling knife or standing in front of a running train ) . If you really want to then assume the fact that this stock can go to zero and accordingly allocate funds. Also do not buy till the 1-2 cr pledged shares have changed hands it can happen at 130 or even at 60 😛 but if you do want to speculate do it only after it has happened.  ( Keep revere stoploss orders )

This would be an interesting stock to watchout for. Wont be advising to clients to take a position into the stock but watch for an intra day punt ( with system stoplosses)  or extremely small punt whenever the 1-2 cr shares delivery is marked.

Will cover some more such manipulations when time permits.

Planning small 1 hour webinars on Technical Analysis focusing on the basics and simple software tools. Would need suggestions from the readers on how it should be structured. Can mail me on nooreshtech@analyseindia.com or chat on gtalk – noorrock2002@gmail.com