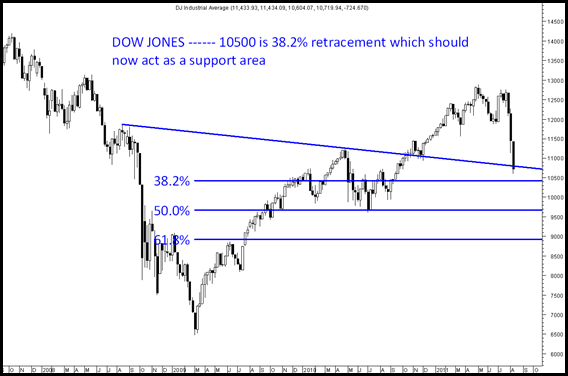 In my previous update - https://nooreshtech.co.in/2011/08/dow-jones-bks-below-momentum-trendine-rsi-indicates-relief-rally-in-coming-week.html

This is what i had mentioned

-> Only time the index has gone below 30 was in 2008 when there were plenty of out of the blue announcements and trigger. In the worst case of some announcement it can go to 10500 levels.

So from here on the downside supports are placed at 10400-10500 from where we can see a sharp bounce back.

The earlier trend of Sell Emerging Markets and Buy Developed markets which worked for last many months now seems to be turning.

I maintain my bullish view on Indian markets but more on the broader market side and not on Index. Downsides to 4700-4750 or 4900-4950 is the base but upside remains super in broader market.

One of our favorites remains Godrej Inds which was recommended at 195-205 made a high of 235 + is now at 215. Investors with a horizon of 3-6 months as well as 1-5 years should accumulate the stock on any sharp decline or SIP. Can be a large part of the portfolio with low downside risk.

There are a few more stocks which we are getting into and will be discussed in the future.