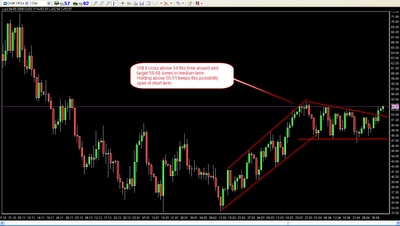 Dow Jones :
After moving up in a steady up channel the upmove seems to have stalled and now may find a range between 8200-8600.
A move on either side could decide the next trend.

Gold Technical view :
Gold seems may stay ranged in 905-965 for the near term. Above 945 may see aa 20-30 $ move in short term.
Its been quite a long time since i updated on Crude, Gold and Dow.I dont update much on the above indices or commodities as these instruments are not what i advise on neither do have many readers trading the same.
The next update would be when i see a major change on the above charts.
WEBINAR RECORDING AVAILABLE
Quite a few people could'nt attend the Webinar on Technical Analysis on last Sunday - 21st June. We also received requests from the attendees, that they would be glad to brush up the session once again.
The direct link for for the recording is given below: So take ur headphones and check it.
https://www.wiziq.com/tutorsession/detail.aspx?id=A7AACFF5C64D4421AD9BDEFF84C9D413
Go through it and send in a detailed feedback to analyseindia@gmail.com. This was a trial run so later we can come up with more and better interactive webinars.
For ADVISORY SERVICES click here--https://nooreshtech.co.in/noor/index.php?q=content/subscription-details
Soon we would be coming out with more new schemes in coming month.
Best Regards,
Nooresh
09819225396
noorrock2002@gmail.com