The thought on this came by reading this article

by Moneylife on their Smart Savers.

The image has been picked up from the same article. 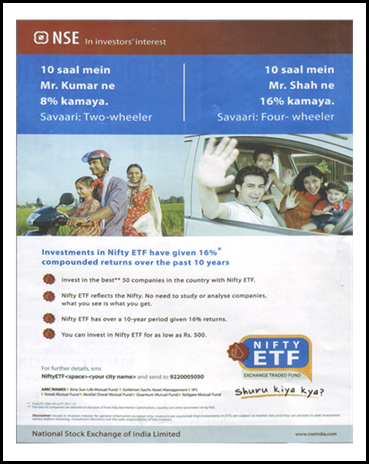 NSE mentions how one can afford buying a car at 16% returns from Nifty.

This is what Moneylife mentions

NSE has taken a convenient 10-year period when Nifty has indeed delivered an annualised return of 16%. What about the other 10-year periods? We have analysed the 10-year returns of the Nifty from March 1991 to September 2013, with a six month frequency. Out of the 26 periods, the Nifty delivered a return of 16% or greater in just seven periods, i.e. just 27% of the time. Much of the returns came in the massive bull-run witnessed between 2003 to 2007. Had one invested in Sensex in 1992, investors would have even faced negative returns after 10 years. Nifty was not around in 1992 but the returns would have been similar. The 10-year period from March 1992 to March 2002 would have resulted in a loss of 1%. The investor would have had to sell his scooter and settle for bus rides. For the 10-year periods ending September 2001 to March 2005, investors would have had to settle for a return of less than 10%. The average of the 26 ten-year periods works out to 12%. NSE has chosen to present a misleading picture of returns but arbitrarily choosing a start date and an end date, all in the “investors’ interest”.

-> Although am in favor of Index Funds/ETFs instead of Mutual Funds but the above advertisement is not the right way to pitch them. Wish the ETFs were much more liquid and gave many sector specific ETFs.

-> The advertisement conveniently mentions the names of AMCs having ETF products which i believe is a good thing as these are low cost products. At the same time NSE does not need to sell this product by the name of returns but by the benefits of low cost, easier to use and flexibility to invest smaller sums at any intervals. But we have seen it is returns which entice investors. ULIPs were sold in 2006-2008 with promise of 20% CAGR.

-> Why should there be 10 year rolling periods when AMCs use Sensex from inception data like 1979 for justifying equity returns.

-> Similarly Nifty returns from inception in 1994  is 9.1% CAGR over 19 years but the last 10 year returns look to be better and that has been used.

-> The standard approach in selling any asset class would be to present the best deductible statistics :).

The only way to get better returns is to have a disciplined approach , research , learn about markets and more !!

Below are a few interesting quotes on statistics.

"Facts are stubborn, but statistics are more pliable." - Mark Twain

"I can prove anything by statistics except the truth." - George Canning

"Torture numbers, and they'll confess to anything." - Gregg Easterbrook

Continuing with the book recommendations as in previous posts and to get some e vouchers as an affiliate below are a couple of books am looking forward to read. Already ordered the checklist manifesto by Atul Gawande and next in list is Thinking Fast and Slow by Daniel Kahnemann