In many of my interactions with amateur analysts, traders and investors have heard about this word GAPS. The above phenomenon a GAP is not a technical study but is conveniently used by analysts for their own interpretations or to justify a view.

Now let us look into what is a gap and how/why is it formed.

Meaning – A gap is an area on a price chart in which there were no trades.

Why/How – The trading hours of markets are only 6-8 hours in the day but lot of events take place beyond that and the stock prices do not get trading hours to discount the event. So this leads to a price gap.

For example – Elections in India lead to a 20% circuit gap or a Fed decision overnight leads to gap down move.

Before i get into types of Gaps let me first tell you there is no technical or quant analysis or any other analysis which gives you a set of rule saying Gaps are to be filled or not filled and if filled then in X no of days. 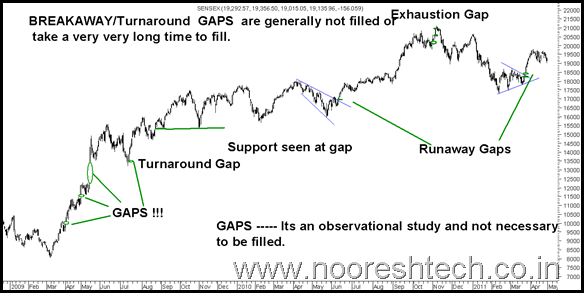 Common – These are normal gaps seen in terms of trading momentum and are generally filled. These may not be linked to any event or technical breakout.

Example – If u see the exhaustion gap before that there are two gaps ( common gaps ).

Brekaway Gaps -  A gap which is generally a follow up to a consolidation range and the stock or index breaks out from the range. This can also be associated with a game changer event.

Example – Election Gap and the current one seen at 18373 which led to the breakout.

Turnaround Gaps – These are very rare and is purely out of observation and may happen after a continous fall or rise after which it leads to a sudden burst of demand and supply.

Not necessary to be filled but such gaps should provide strong support.

Exhaustion Gaps – After a good upmove and successive 2-3 gaps in few sessions leads to the markets getting overbought or oversold in quick time. Such a move is not sustainable and usually 3rd or 4th is an exhaustion gap and is a characteristic top in the short term.

Now after so much of useful or useless theory the bottomline is every gap has to be analyzed in individual circumstances but many a times traders and analyst give random analysis on gaps 🙂 as they have never observed or analyzed markets but end up following a set of rules 🙂 which dont work half of the time.

All of 2009 i kept reading so many people forcing a view that election gap has to be filled and 12k has to come. My counter argument there is a gap at 19500 and 18k also 😛 which should get filled first. So there is no analysis 🙂 to confirm when a gap is filled but if one analyzes the reason for a gap you would get a clearly probable move.

So let us look into the current gap up moves

Conclusion on Observational Study of Gaps -

If its a breakaway gap then 18200-18400 zone should not be filled or provide maximum support and one may look to buy just closer or above this zone. This will give a good risk-reward entry and the markets will continue their current upmove.

Also if that gets filled and broken on downside then as per observational study next level is 17k 🙁 which i dont think is a possibility in near term.

As an attempt to discuss more we are organizing a webinar a different platform to discuss technical analysis and how it is to be used.

All you need is a microphone/speaker and a broadband internet connection.

Attend 'FREE WEBINAR'
on
Magic of Tehnical Analysis plus get Hot Recommendations from Nooresh.

TO REGISTER MAIL TO freetrial@analyseindia.com