Before i start on to the technical view it makes me bother is that lot of us end up seeing Dow Jones and European Indices late into the night but is there actually a co-relation in either of the indices.

Although i could not get time to do exact analysis i asked a friend by giving him excel sheet of Dow Jones prices and Sensex prices. The end result is the co-relation is barely 0.3-0.35 which is not much of a no to bother for.

So if you have been keeping awake hoping for a recovery or a slide in US or European Indices for cues then stop doing it 🙂 Sleep a little early before 2 am or go around spend some time doing better things then watching CNBC or the computer screen.

Many a times even on the upside a similar disparity remains!.

As of now the market remains ranged between 17300-17900.Continue to buy on dips and exit on rise for index.

Stocks to watchout for:

Nahar Spinning a breakout could see more momentum above 100. check chart below

Neyvyeli Lignite buy on dips for a target of 165/175 in short term. Check chart below 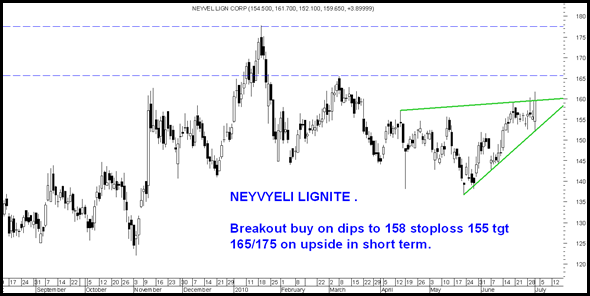